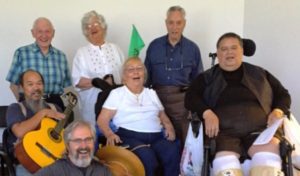 Heroes’ Voices offers workshops at the Cal-Vet Home in Yountville, mostly with elderly veterans plus a few younger vets with health challenges like Parkinson’s Disease.

One vet, a man in his 50s, likes Simon & Garfunkel, so we often sing numbers like The Boxer and Sounds of Silence. After one recent session, he walked me out of the building. It was pretty slow going because his condition is somewhat advanced. He said, “I want to thank you. Because of Parkinson’s I have been losing my ability to speak, but since I’ve begun singing with you, my voice has gotten stronger. Thank you for giving me back my voice.”

At another recent session, I introduced the wonderful folk song, Where Have All the Flowers Gone?. When we got to the verse, “Where have all the soldiers gone?”, one of the women vets began to cry and left the room. I felt terrible. The songs we sing often stir powerful emotions, but this was the first time an elderly vet had broken down that way.

I connected with her the next week and asked if she was okay with what had happened. “Oh yes!” she responded, “Once again, after several years of silence, I now sing in the shower and so does my heart. Thank you for bringing me peace, happiness and real joy.”