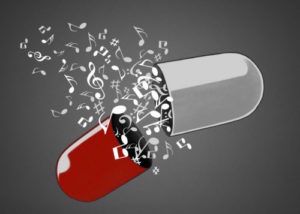 Veteran patients in the Psychiatric Intensive Care Unit at the San Francisco VA come and go. They may be there for a few days or for months. During the weekly Heroes’ Voices singing sessions, I encounter veterans with a range of challenges that require them to be hospitalized.

Some weeks ago, I encountered a young man who had just arrived. This vet was very friendly, but completely wired. He was talking a mile a minute and could barely sit still. When I asked him his name, he replied in a loud voice, “My name is Corn Flakes!”

He asked if he could play guitar along with me as we sang, so we got out one of the guitars that Heroes’ Voices has donated to the unit. I started the session with simple songs with just a few chords so “Corn Flakes” could follow along. It was clear that he knew how to play guitar, but his mind was moving just too fast for him to focus. So, after a few songs, he stopped trying to play guitar and just sang.

The young vet sang with great enthusiasm, requesting songs, and basically leading the entire group in the singing. Singing really allowed him to focus. In fact, he made a great song leader and had a very nice singing voice.

As time passed his manic energy began to subside. We sang several ballads in a row, and slowly this veteran began to sing from his heart, instead of spinning in his head.

At one point “Corn Flakes” looked up at me and said, “I checked myself into this place last night. Now I feel fantastic. Music is my milligrams!” He was sort of joking when he said it, but he didn’t know how right he was. Music is a powerful healing protocol in the short, medium and long term. After working for three years with veterans, I continue to be pleased and surprised to observe the many ways that music can powerfully affect their lives.

When I returned to the VA Psychiatric Unit the next week, I was happy to see that the young veteran was no longer there. My hope is that he continues to keep the healing power of music in his life.