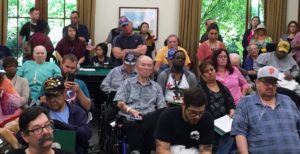 In Heroes’ Voices music and poetry workshops there are sometimes sometimes generations of poets sharing their reflections on living through and surviving combat. Recently there were two veterans, (both relatively new to writing and reading their poetry in public) who had become very close during their treatment in the residential poly-trauma program of the Palo Alto VA Medical Center. Both veterans suffered from Traumatic Brain Injury and Post Traumatic Stress, each manifesting different challenges due to their injuries.

The older veteran was an Army Colonel named David. He had four deployments in support of the War on Terror. David had served as a Commander of Combat Stress Unit in Iraq and Afghanistan. According to “the Colonel”, Combat Stress Units (CSC) cared for soldiers who have “wounds that don’t bleed”. CSC units main mission focused neuro-psychiatric triage, grief and lose bereavement counseling, combat stress control interventions, and education and training.

The other poet was a young Marine Corps Lance Corporal veteran named “Rico” whose physical injuries included nerve damage to his eyes that rendered him mostly blind.

This last workshop in the series happened to coincide with the Colonel’s last day at the poly-trauma program, so it was also his last day to be with Rico. During their time together at the VA, “the Colonel” had naturally become a mentor for the much younger soldier. Rico was the first to share his poem about how his young life had transformed since his injuries and his return “to the world”. Rico stood with pride as his VA therapist, acting as his eyes and voice, read his poem to the gathering.

After the group sang a few more songs, “the Colonel” read a very dark poem that he had written, inspired by his time in Afghanistan.

Rico decided that his poem was too private to share beyond the group, but David gave permission to share his poem:

Stack team going in.
Stack team coming out.
Burst through the doors.
Stomp them out

In peace as in war,
the moon doesn’t hold still.
It watches

Emotions were high because it was the last session. Special bonds are formed when a group of veterans spends time together singing, and allowing themselves to be vulnerable enough to publicly share poetry that reflects the raw and vivid struggles in their lives. As our time together was drawing to an end, I asked the group to request a closing song for the workshop. They chose Amazing Grace. As we all sang Amazing Grace, David embraced Rico who was weeping and a Colonel gently whispered his goodbyes to a 22-year-old wounded warrior.