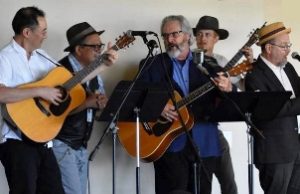 On Sunday, June 3, we celebrated the second annual National Veteran’s Poetry contest at The General’s Residence, Fort Mason in San Francisco. The event, called The Soldier’s Journey was introduced by Richard Harrell, Executive Director. It was the culmination of a national poetry contest for veterans. Vets from all branches of Service were invited to submit poetry to a distinguished jury, which included local poet Lawrence Ferlinghetti, poet and author Major General John Borling, Rick Davis, poet Colonel David Rabb, and Poet Laureate of San Francisco Kim Shuck.

The afternoon event honored the winners of the Poetry Contest, and provided music and poetry exploring war, peace, as well as soldiers’ experiences before, during and after battle. The winning entry was awarded to Bill Glose of Yorktown Virginia for his poem I.E.D. Mr. Glose won a $1,000.00 first prize for his work. A special poem titled Four Angels was read by poet Robert Kaplan, dedicated to the three healthcare workers who recently lost their lives at The Pathway Home in Yountville. These brave women will long be remembered for their dedicated work with Veterans suffering the effects of PTSD.

Read this year’s winning poems on our Poetry page.