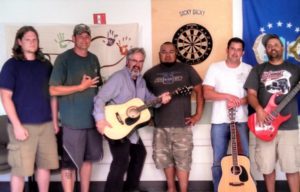 Heroes’ Voices conducted a series of music and poetry workshops with a group at the Pathway Home PTSD Treatment Program, a four-month residential program for Iraq and Afghanistan veterans in Yountville, CA. Some of the vets in this program have symptoms that are considered too volatile for residential programs such as those we serve at the Menlo Park VA.

The director of the program had warned us that these vets were pretty “hard core” due to the severity of their Post-Traumatic Stress, but we found them to be really engaged and positive when singing together. We donated several guitars to the program so that any vet could make music any time.

One of the young men clearly had been seriously wounded: He had a significant scar on his head and he walked slowly with a cane. At one of our workshops, this young wounded vet said to me, “I used to play guitar. I played in a band.” I asked what kind of music he used to play. Apparently, he had been in a punk band and played lead guitar, but said, “Because of my injury I can’t remember things, so I can’t play anymore.” I paused for a moment, then said, “Have you tried?” and I handed him my guitar.

He slowly took my guitar in his hands, looked at it for a moment, and then nailed a series of florid guitar licks. He was really “shredding”, as they say. Everyone in the room was floored by this young vet’s musical talent and facility on the guitar. He looked up at me with a look of both joy and disbelief in his eyes and I said, “I guess you remember more than you think.” Then I pointed to the guitars that we had donated to the program propped up in the corner and said, “Those guitars are here for you. You can play them any time, and if you want a guitar of your own to keep, just let me know.”

There are amazing possibilities for change and healing if we just reach out, and show up. I am so glad Heroes’ Voices was at the right place at the right time and with the right resources to bring the healing power of music back into the life of this young veteran who has lost so much.

I offer my heartfelt thanks to those of you who whose donations to Guitar Corps make it possible for us to make guitars available, not only at Pathway Home but also at the many other sites where we touch the lives of veterans. And I offer my best wishes to the veterans who use those guitars to access the healing power of music.