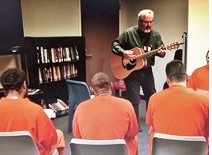 A few weeks ago we began doing music and poetry workshops at the San Francisco County Jail in San Bruno. I connected with Ron Perez, who works with all the veteran inmates who are incarcerated there. Ron is a proud Army veteran who served in Vietnam, and is very active in the local veterans’ community. Ron has worked for years in the correctional system. He sports a ponytail and wears a jacket with a “Grateful Dead” logo on the back.

We met last fall at a veterans’ service conference sponsored by Swords to Plowshares. The day I met him he suggested that Heroes’ Voices workshops would be a great program for the veterans in the County Jail, and after working through some red tape, we finally began the workshops.

The actual cell block is a semi-circular, two story arrangement of glass cells, all facing the central guard’s control station. Most of the inmates in that “Pod” are veterans. We meet for the music and poetry sessions in a small classroom just off the main area.

The vets are all dressed in bright orange jump suits and wear orange plastic clog shoes. They are a very pleasant and friendly group of guys and really love singing together. Some of the guys make a list every week requesting new songs for me to bring in for the next session. One vet even had me bring, “I Left My Heart in San Francisco”, which he sang as a solo for everyone. Several of the vets share original poems that they have written while in jail. It’s a real privilege to have something that intimate shared in an otherwise pretty hard environment.

Of all the veterans workshops we have done so far, this group of vets at the County Jail is the most enthusiastic. I am always moved observing the power of music as it touches the lives of veterans who are going through a tough time in their lives.

Here’s what Ron said about the Heroes’ Voices workshops:

Heroes’ Voices began doing regular music workshops with our veteran inmates for the last several weeks, and it has made a significantly positive impact on the veterans. The music sessions create a sense of joy and community that is a welcome experience in the Country Jail, and the veterans eagerly look forward to attending each session. The mood and spirit of every veteran participant is lifted by participating in Heroes’ Voices workshops.

Ron Perez, Intake coordinator
COVER (Community of veterans engaged in restoration justice)
A program of the San Francisco Sheriff’s Department in cooperation with Swords to Plowshares