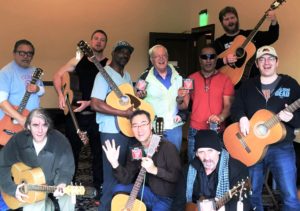 Heroes’ Voices has been doing weekly workshops at the Psychiatric Intensive Care Unit, (PICU) at the VA Hospital in San Francisco. Over the past couple of months several patients at the PICU have joined me in playing guitar in our singing workshops. Some of the vets were pretty lost and sort of helplessly gripped their guitars, but a couple had real facility, jamming along on every song.

While I was tuning up my guitar at the beginning of a recent session, I struck up a conversation with very young vet. (We’ll call him Gary.) Gary was pretty wired. While being a very positive and friendly guy, Gary’s thoughts and attention were spinning at warp speed. It was clear that this Iraq veteran needed to be in at the PICU, and I was glad that he was getting the care he needed at the VA Medical Center.

This very young veteran not only kept up on every song in every key, but he added really great lead flourishes. Gary said it had been quite a while since he had played guitar, and it was clear how much joy and satisfaction that making music gave him. This young vet was still at the PICU on my next visit, picking away with me in the music session, but when I returned the next week, he had been released. I figured that I had seen the last of Gary.

A couple of months later Gary showed up at our Guitar Corps session at the Veterans Building to join the intermediate class. I was delighted to see him there jamming with eight other veterans! He was very happy to be back “in the world” and playing guitar again, but he was still a little wired, talking a mile a minute.

After the class, Gary helped me haul the guitars from the lesson back to my office, and I had an opportunity to ask him about his journey as a veteran. Frankly, I was curious how he ended up with such severe PTSD. He still spoke rapidly, but he was clearly much more grounded than he had been at the Medical Center. One incident he laughingly recounted caught my imagination.

His military outpost in Iraq, was mortared almost every night. One night, while Gary was taking a shower, a mortar attack began unusually early. The first explosions were at some distance, so Gary decided to finish washing his hair. However, very quickly mortars began to explode close by, and Gary grabbed his helmet and ran naked across the compound to the shelter.

Gary laughs about the incident now, but living in the shadow of death night after night left an indelible mark on this young man’s life. Gary has been reaching out to get the healing help he needs, from the VA and now from Heroes’ Voices. Our hope is that we can continue to be a source of community and healing to vets like Gary.