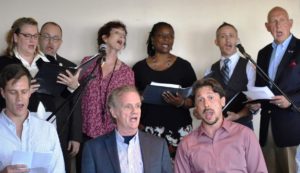 The first performance of The Soldier’s Journey wowed the audience at San Francisco’s Fort Mason. The celebration featured song, stand-up comedy, and poetry.

The four winning poems of the Heroes’ Voices National Poetry Contest were read, moving the audience to tears. 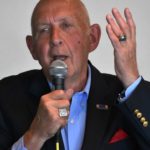 Our special guest, Major General John Borling, provided comic relief as he began his remarks with a series of hilarious comments about life in and out of prison camp.

His recital of selections from his book, Taps on the Walls, addressed the joys and sadness of his experiences in the military.

Musical selections ranged from traditional songs to the world premiere of a new work by Michael Conley.

Performers included poets and musicians who have been honing their crafts in Heroes’ Voices workshops, as well as the staff and friends of Heroes’ Voices.

Don’t miss the second performance of The Soldiers Journey at the Hylton Performing Arts Center on the George Mason University campus in Manassas, Virginia this Wednesday, June 7 at 7:30 PM. There is no charge for admission, donations will be accepted.

These performances are the culminating events of the Heroes’ Voices National Veterans Poetry Contest, a cooperative venture between Heroes’ Voices and George Mason University. The four winning poems, selected from hundreds of entries we received from veterans across America, will be featured at both events. 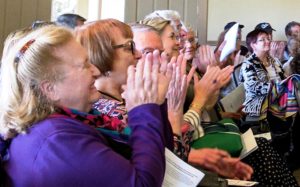 These performances of The Soldiers Journey
are dedicated to the memory of
Heroes’ Voices founding board member and sponsor,
Rusty Rolland.