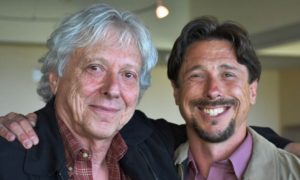 One of the high points of our San Francisco performance of The Soldier’s Journey was a young veteran reading a poem that he had recently composed. That moment was particularly moving for me because, until that day, I had only seen Robert wearing an orange prison uniform.

Robert, a US Navy veteran, was released from the San Francisco County Jail just a few months ago. Following his military service Robert got into drugs, got into trouble, and found himself serving six months in jail.

Every Monday afternoon, Heroes’ Voices sponsors a music and poetry session at the San Francisco County Jail. The sessions are held in a small classroom just off the main floor of the 24 cell “Pod”. The entire area is in full view of the elevated, semi-circular deputy’s station, but when we shut the glass door, that room becomes truly ours. For those six months Robert was one of the most enthusiastic participants in the program, always ready to lead the group singing solos, and always ready to share a poem.

When we said goodbye just before his release, he promised to stay in touch. Robert followed through on his promise. He sent me e-mails regularly with updates, often including his poetry. It occurred to me that Robert should to participate in The Soldier’s Journey, sharing his personal story and his poetry. I asked Robert if he was comfortable revealing publicly that he had been in jail. Without hesitation, he generously agreed to share his whole story.

Robert was thrilled to be invited, but faced considerable challenges working out the details. He was in a supervised post-incarceration living situation and had to jump through several hoops to get permission to arrange for travel and other details. Robert sent me email updates almost every day for a couple of weeks, and at times it looked like he would not be able to come. Finally, he managed to work out the details, and his father arranged to come up from Palm Springs for the Sunday performance.

On the day of the performance, Robert and his father arrived early for the final rehearsal run-through. This was the first time I had ever seen Robert in “civilian” clothes rather than in an orange prison jump suit. He looked good, clear eyed and hopeful. When the time came in the performance for Robert to speak and share his poem, understandably he was very nervous. I gave him a brief introduction, then Robert took the stage.

Robert gave his own moving introduction, thanking Heroes’ Voices, his father and all those in the audience whose presence at the event demonstrated their support for veterans. Then he read his poem, “Music Teleportation.” I hope you will take a moment to watch this video of Navy Veteran Robert Kaplan sharing his poem.

Music and poetry have the power to heal brains, lives and families.