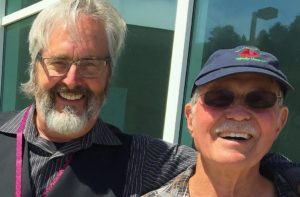 Every Monday Heroes’ Voices does music and poetry with veteran inmates at the San Francisco County Jail. Our contact at the jail is Ron Perez, a leader in veterans’ services in the San Francisco Bay area. A couple of weeks ago he called me with an exciting bit of news. Ron invited Country Joe McDonald to join Heroes’ Voices making music with veterans. 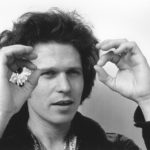 Joe McDonald was the leader of the famous sixties rock band, Country Joe and the Fish, who galvanized the crowd at Woodstock with their music and their famous “Fish Cheer”, “Give Me An F…etc.” I was excited about having Joe coming out to the jail, but the veteran inmates were thrilled.

Initially, Joe’s visit was going to be an intimate session just with the vets, but once word got out around the jail, the event became a much bigger deal. The administration at the county jail decided to invite the inmates that participate in the school programs. So, our gathering of a couple dozen veterans suddenly became a concert event with perhaps 100 inmates in attendance.

The Heroes’ Voices veterans got to sing two songs on their own before Joe began to perform. As fate would have it, there are two of the new veteran inmates who have added a real positive jolt to our music group. One young vet named Eric can really play blues on the guitar and one older guy named Bill is a great harmonica player!

We were all crowded into a large room, row after row of men in orange. The Captain of the county jail warmly greeted all the gathered inmates, and of course thanked Country Joe for coming to sing at the jail.

When the Heroes’ Voices veterans got up to start the musical program, they were very warmly received. First, we sang the San Francisco favorite Sitting on the Dock of the Bay, and I was delighted to hear some of the other inmates singing along. Then we struck up Kansas City Blues. The inmates began to cheer as soon as Eric started playing his solo guitar licks. Then Bill started wailing on the harmonica and the room went wild. The Heroes’ Voices vets really got to shine, and it meant the world to them to be able to be the “opening act” for Country Joe McDonald.

Country Joe did a marvelous set of original songs, including a love song that he had written back in the 60s for one of his girlfriends, Janis Joplin. Joe also regaled us with several delightful “war stories” from his rock and roll days in the 60s and 70s. His songs and his stories had a gentle charm that reminded me of both Will Rogers and John Prine.

Those men in orange, crowded together in that stuffy room, savored every moment of Country Joe’s performance, like a traveler enjoys feast after a long journey. Ron tells me that Joe would like to come back to sing again at the County Jail sometime soon. He will be most welcome.