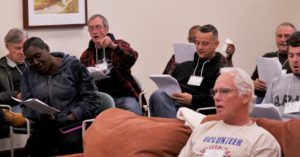 Heroes’ Voices began serving veterans almost four years ago. Our first series of music and poetry workshops were at the Veterans Administration in Menlo Park. We made the initial connection to Menlo Park through the staff from Senator Barbara Boxer’s office.

The VA facility in Menlo Park has been around for decades and it was the first VA in the country to have treatment programs for PTSD. During the Viet Nam war, specialized treatments began at the Menlo Park VA for what would become known as Post-Traumatic Stress Disorder. This is before it was a recognized diagnosis. In the heart of the Silicon Valley, they continue to be leaders in PTSD treatment to this day.

Our first planning meetings with the VA staff were in the summer of 2013. My colleague Dr. Lynne Morrow and I met several times with the music therapists Kristin Grillo and Beth Hardy. We met to strategize the best ways to interface with programs at the VA. Kristin and Beth were music therapists for veterans in PTSD, Drug and Alcohol rehabilitation and other residential treatment programs. As music therapists, they knew the extraordinary power of music. However, their time and resources were very limited, and they were thrilled to have Heroes’ Voices as a partner.

We decided to sponsor a series of weekly Saturday music and poetry workshops, eight in the fall and another eight in the spring. In late September, Lynne and I began workshops every Saturday morning. I drove down to Menlo Park from San Francisco, but Lynne drove all the way down from Rohnert Park, close to a two-hour drive. We were also able to get guitars donated to a couple of veterans from a local guitar store, Gryphon Strings, and set up some free lessons for them.

The workshops were an unqualified success. We got great feedback from the veterans. Here are some quotes from veterans that served in Iraq, Afghanistan and Viet Nam:

The Heroes’ Voices sessions helped build a sense of comradery and community in my life that has been missing in my life.

I find it cathartic and it brings me inspiration. I feel safe here. 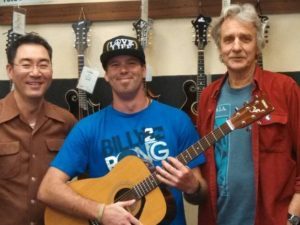 About a year later, I was approached by one of the guitar teachers from Gryphon Strings, Larry Chung. Larry proposed to create a program to give free guitar lessons to the veterans in Menlo Park. Gryphon Strings, generously offered to donate quality second hand guitars to our new program we called Heroes’ Voices “Guitar Corps.” Within weeks we were teaching the veterans at Menlo Park, and awarding vets free guitars to keep. Gryphon Strings continues to be Heroes’ Voices’ most generous benefactor.

One of our volunteer guitar teachers, Dr. Ben Graham, worked as a PTSD researcher at Menlo Park. He volunteered to design and facilitate a psychological research project that explored the positive effects of consistent guitar lessons on veterans with PTSD. Within months, Heroes’ Voices was co-sponsoring a research program in Menlo Park under the auspices of the Palo Alto Veterans Institute for Research.

After four years, Heroes’ Voices has touched the lives of hundreds of veterans at the Menlo Park VA alone. We have worked with over two thousand veterans in different veterans’ venues in northern California, but the Menlo Park VA feels like home. We just received our second grant from the Palo Alto Community Fund.

Our next series of workshops begins on October 14th. These workshops are open to the public. Come sing with us!